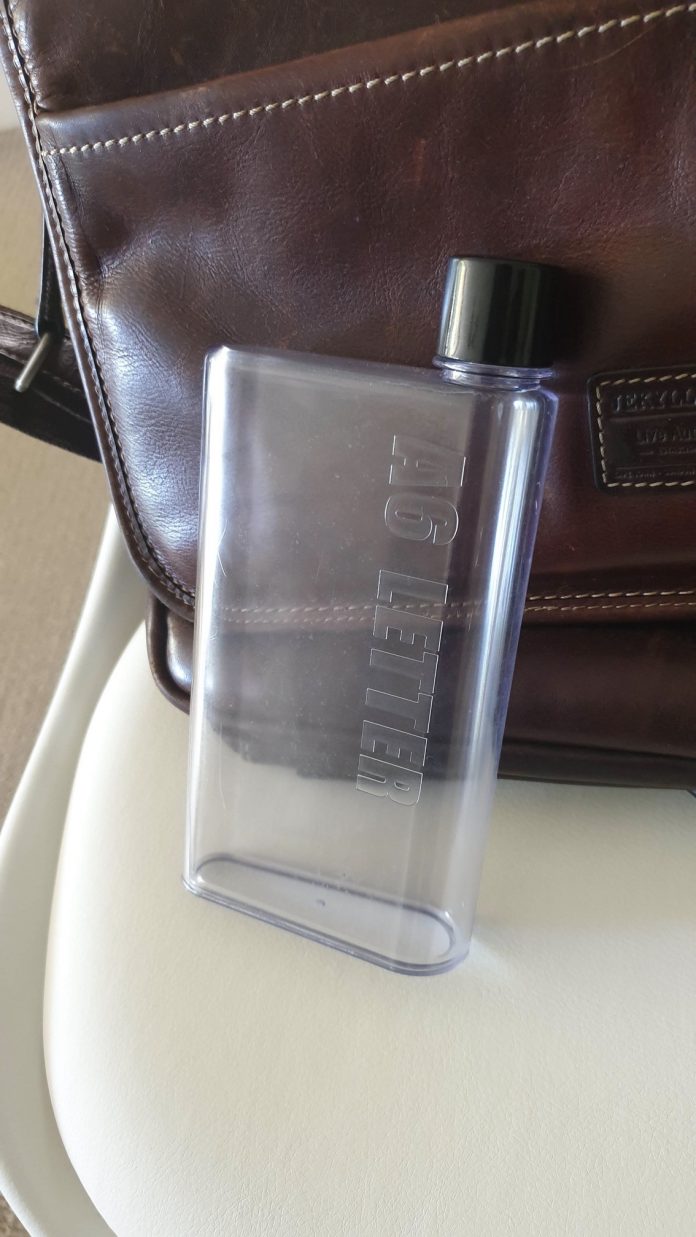 Things these days seem to be getting thinner and thinner, laptops and mobile phones are constantly shaving millimeters off to claim the title of the thinnest ever.

Gone are bulky text books, replaced by iPads and novels by the Kindle. This means that bags are far lighter today then they were when I was in university. People no longer haul around satchels full of books but instead cycle in with a shoulder bag or briefcase for the day.

One thing that hasn’t changed however is our requirement to stay hydrated, one of the easiest ways to get in your recommended 8 glasses of water a day is to make sure that you always have a water bottle on hand. But while there are many great water bottle on the market, most of them follow the same cylindrical shape which doesn’t always fit into small briefcases.

This is where the A5 Memo bottle comes into it’s own. Named unimaginatively after an A5 notebook the A5 Memo bottle is actually slightly larger than its paper counterpart thanks to its cap. It is however far thinner than traditionally shaped water bottles and can fit easily into my briefcase without causing an unsightly bulge.

It doesn’t skimp on capacity either, managing to still hold around 330ml – the same amount that you would get from a soft drink can. The design is a little unusual and has more than a passing resemblance to a hip flask but if my co-workers thought that I was drinking from a hip flask throughout the day they have kept their thoughts to themselves up to this point.

The design is fairly elegant and well thought out with no sharp edges and branding kept to a minimum except for the A6 Memo which is embossed along the side. There are no bright colours and it will fit in well in most situations or desks.

On a more functional level because the bottle is so thin, the opening has to be fairly narrow. This is fine for drinking but can make cleaning a little bit harder, I would not recommend it if you are thinking of putting juice or other liquids that may require frequent cleaning. Not having a large opening also means that you won’t be able to put things like ice cubes in the bottle unless they are unusually thin. Luckily it is dishwasher safe and I have had no issues keeping it clean.

Being completely transparent means that you can easily see if it does ever get dirty and makes it easy to keep track of how much water you have been drinking. The bottle itself is made out of a fairly heavy duty plastic, which while not as premium as glass, is a lot more durable and I have had no issues with it ever leaking. Which is just as well as it lives next to my Macbook in my bag.

The Memo bottle comes in an A5 size as well, however I think that the A6 version seems to be the best trade off between volume and size. All in all I think that this is a well made, if fairly niche water bottle that, while not the highest capacity, is great for people with thin bags or purses. After all the best water bottle is the one that you have with you and I have definitely found myself drinking more water since I switched to the Memo bottle.