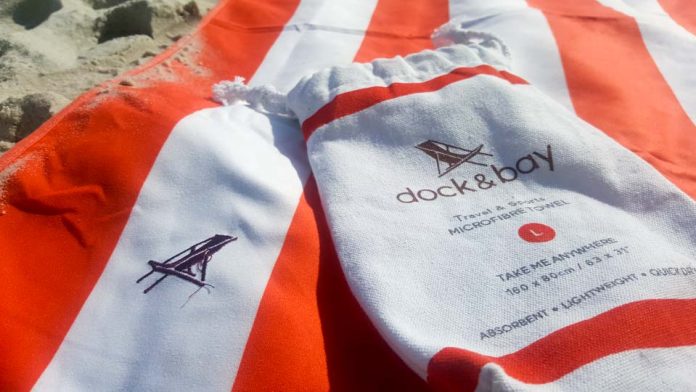 I have 2 main gripes with most microfiber towels. Firstly they are often too small to wrap around you like a normal towel. Even the large and extra large sizes are usually smaller than a traditional towel. Second their plan colours make them look like something that would fit in at a campsite or on a hike but very few other places.

Enter the Dock and Bay Microfiber towel that manages to solve all of these problems beautifully. If Dock and Bay sound familiar you may have heard of them from Dragon’s Den, however I came across them while I was trawling mindlessly through Amazon one evening and ordered one immediately.

The first thing that you will notice is the case that it comes it. It is slightly bigger than your average book and is roughly a quarter of the size of a regular towel. For those of you who prefer numbers to vague comparisons the dimensions of the bag are 26x16cm. It is made out of thick cloth that immediately shouts quality and would not look out of place on a yacht or upper market island resort. One side of the bag is cloth with the other half consisting of a mesh, presumably to allow the towel to air and dry.

Another thing to note about the bag is that it is just the right size. It is not so small that you will never be able to fit your towel back into it once you have unfolded it. In fact you can also squeeze in a cellphone and wallet into the bag no problem if you are just taking a stroll down to the beach and don’t need to carry much with you. It also packs down small enough that you can fit it in a handbag or backpack without it taking up much space.

I put it into my Travelmor Jetpack, a lightweight packable 20l bag, on my trip to South Africa where I cycled to the beach and there was space for a change of clothes as well as my helmet and cycling gear with room to spare.

The towel itself is large, I ordered my one online and given my experience with other microfiber towels , was not sure whether large would actually be large. I took to so far as to measure my current beach towel and was happy to find that the Dock and Bay microfiber towel was actually LARGER. I found this size to be a perfect balance between portability and size, your feet will stick off the end a bit and they do sell an extra large size towel if you dislike sandy feet or are an actual giant.

Overall the towel looks great, I ordered the “Coral” color which looks pretty orange in photographs but looks a few shades closer to pink in real life. The best thing is that this towel doesn’t look like a microfiber towel, the crisp pattern and size help it to blend in with all the other towels on the beach. The stitching is not the greatest and I noticed a number of threads sticking out, however this was mainly on the embroidery and I have not had any issues of anything unravelling. It does also have the typical microfiber towel feel of being smooth and sometimes feeling almost slightly slimy. It absorbs water like crazy though and dries out overnight or in a matter of minutes in the sun so the unusual texture is a sacrifice that I will gladly make. A bonus of having this smooth texture is that sand does not cling to the towel, when its time to pack up a one or two shakes and it will look like new.

One thing that I have noticed after travelling with it for about a year now is that white is not the best colour for a towel that you are going to be taking out and about. The white stripes definitely show dirt more than the red parts, on one occasion I draped the towel over an outside banister to dry and when I took it off found that the white parts had become discoloured from the dust that had been on it, This does wash out pretty easily but is something to think about if you plan on using this as a travel towel and taking it on the road with you for extended periods.

Overall I think that this is the best microfiber towel you can get on the market at the moment, it is perfect for the beach or a weekend get away or festival and fits in with all the regular towels until it is time to leave whereupon it slips easily into a handbag or backpack. It is definitely not the cheapest towel on the market but if you travel or go to the beach a lot this should be near the top of your list.