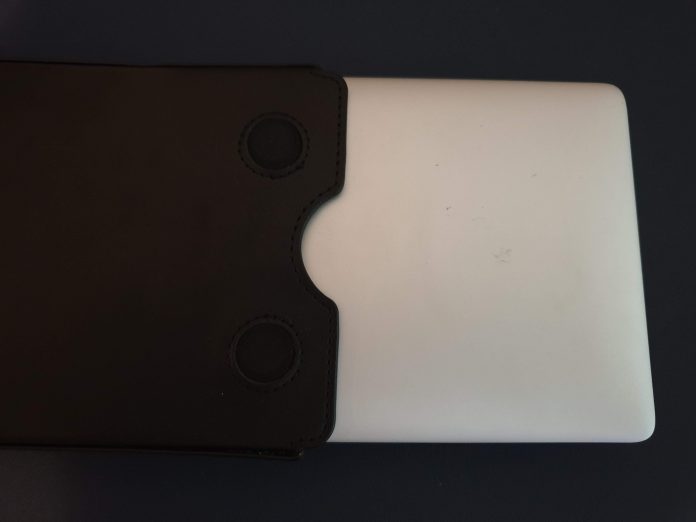 The GPD Pocket 2 is built around portability – and it does a fantastic job at this – but this also means that it will spend a lot of its life being carried around in bags and jacket pockets so finding a way to protect the somewhat scratchable outside is important if you care about aesthetics.

I used to keep my GPD Pocket 2 inside a generic foam zip cover that I go off Amazon and was originally designed to hold the Kindle. However I found that while it did an admirable job at protecting the device, the case was slightly oversized and added just enough bulk to make it non-pocketable.

After being unable to find a slimline case (ideally I wanted one of those plastic clip on covers that you find for Macbooks) I decided to take the leap and get the official “leather” case.

The first thing that I noticed on opening the package was that the the magnets were slightly miss aligned which meant that flap of the lid was not at a perfect angle when closed. It doesn’t effect the functionality of the case at all but was still disappointing to see that the meticulous design of the GPD Pocket 2 had not carried over to its case. It does not really bother me but if you are bothered by that sort of thing it’s definitely something to be aware of.

Aside from this, the case seems to be well built and offers a good balance between cushioning and compactness. It is definitely no Otterbox but will protect the device from being scratched in a back. There is not a lot of padding though so it definitely provides protection from scratches more than drops.

The magnets themselves are pretty strong and it’s unlikely that the flap will open unintentionally, even when the case is upside down and the whole weight of the device is resting on the flap.

The case protects most of the device but there is a small gap when the lid is closed which could let in lint or dust. I have not had a problem with it, but if there is sand or small particulates in your bag I imagine that it will find its way inside this case.

Overall I think that this case is definitely in the nice to have category. If you want to protect your device from scratches while still being able to fit it in a jacket pocket then your options are pretty limited. I was unable to find any third party cases that were specifically designed for the GPD Pocket 2 so you don’t have much of a choice. It’s either this case, a case that is designed for something like a Kindle but will likely add more bulk or something like a skin that will protect from scratches but do nothing to protect from dust.

That being said this is not a bad case at all. It’s just that it is pretending to be a premium leather case but it does not have the premium attention to detail. There are some issues such as the magnets not being completely straight and some questionable stitching in places but overall it looks clean and does the job.

The biggest complement is that since I have started to use this case I have once again started carrying the GPD Pocket 2 more regularly again.