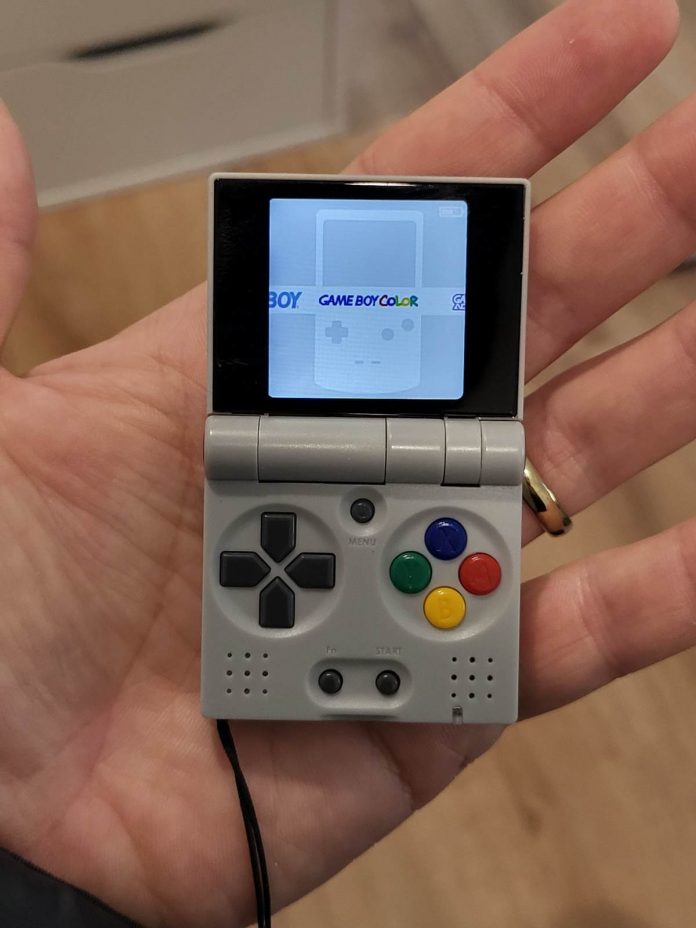 What is the Funkey S?

I’m old enough to have grown up with the original Gameboy and retro games hold a special place in my heart, reminding me of a simpler time in my life. As I’ve grown older and now have work and a toddler to look after, I find that there’s less and less time available to play games and hour long gaming sessions are a thing of the past.

I think that’s why I love the idea of the Funkey so much. This is a device that is designed to complement your life. It’s tiny by any standard, roughly the size of the original iPod nano that Steve Jobs famously pulled from the coin pocket on his jeans (if any of my readers are old enough to remember that). It also has a host of features that make it easy to pick up and play for a few minutes and then simply fold up when you need to.

Right from the go it is clear that this is a project of passion. The themes, the optimisation, the customisable button colours. Even if they had not included any of these, the device would have been great. But with the care and attention to detail has made this one of the most impressive crowd funded devices that I own.

As I mentioned earlier, the Funkey is absolutely tiny. It’s roughly modelled after the Nintendo DS with its clamshell design.

It’s small enough to not look out of place on a keychain and even comes with a lanyard attachment. I generally keep it in the coin pocket of my jeans when I am going out where it is protected from the rest of the junk floating around my pockets and is easy to find when I want to use it.

Thankfully it’s miniscule size doesn’t render it useable. The screen, while small, is crisp and the text is perfectly readable even at arms length. The bezel is not big by any means but when the total screen size is only 1.5″ it does take up a significant amount of space and I can’t help wishing that the side bezels were smaller.

The controls are also surprisingly usable, this isn’t meant for long stints of gaming and you might have trouble playing fast paced button mashing games but it’s perfect for most RPG’s or turn based strategy games. I find that for these games the compactness of the buttons even allows you to play completely one handed which is great when you need to be holding onto something one the train or are playing while eating lunch.

There are also a number of other features that make this the ultimate on the go gaming device. For example there are embedded magnets that detect when the Funkey is open or closed and will auto save and auto resume the game.

This means that you don’t even need to worry about saving, if you need to get back to work you just close the lid and it will automatically save your game and shutdown. Then later on, when you open it again it will automatically restore you to where you were. This may not sound like much but it can mean the difference between playing for 5 minutes or not bothering.

You are also able to adjust the screen ratio which can can help if you are playing games that do not natively support the square aspect ratio of the Funkey.

Despite being so small, the FunKey team have still managed to make this device easy to modify and repair – The battery can be replaced easily and it even comes with different colour buttons that you can swap in and out. I swapped out the plain grey for the classic SNES button colours as seen below.

There are too many games to list (and I’m also wary of Nintendo), but the Funkey will happily emulate almost any game from the original Gameboy through to the Gameboy Advance and even some PlayStation 1 games – though this is more just to flex the power of the device as playing a PlayStation game on a 1.5″ screen is far from fun.

It comes loaded with a few opensource games but if you can source your own ROMs it’s easy enough to load them. The Funkey appears as a SD card when you connect it to the computer and it really is as simple as dragging and dropping ROMs to the correct folder.

As you’d expect for something this small, the battery life is not fantastic. Depending on the games that you play and the sound and brightness levels, you’ll probably get around 1.5 hours of battery out of the Funkey. Given that I only play it in fairly short bursts when I am out and about I have yet to run out of battery unexpectedly. The Funkey comes with the old fashioned micro USB connection for charging and data transfer which is not a deal breaker but I wish everyone would use USB C on all new devices.

If you can’t already tell, I really like the Funkey S. I own a number of retro handhelds, including Experimental Pi’s PiBoy DMG which is far more powerful. However when I am leaving the house more often than not I find myself grabbing the Funkey over any of these other devices. This is mainly because it’s so small that I don’t really notice it at all until I want to play something, and because of the excellent useability features such as auto resume.

There are some minor things that would be nice – Changing to a USB C connection, smaller screen bezels and maybe even bluetooth or hdmi out. But even without all this the Funkey is absolutely remarkable – It’s always amazing seeing how motivated people with a vision can create a device that is in many ways outshines the giant manufacturers. It’s certainly not cheap but it’s the smallest legitimate emulator that is usable and not just a gimmick.

I look forward to the next iteration if and when it gets released.