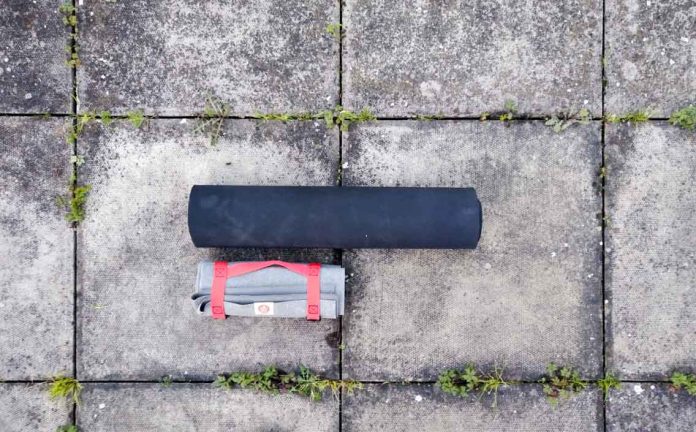 I don’t think I would go as far as to call myself a Yogi. I have, however, experienced the benefits of yoga first hand and am a strong advocate for taking time out to clear your mind and focus on yourself and your body; something that people tend to ignore in this age of fast paced living.

The folding Yogo Ultralight Travel yoga mat is the newest addition to the yoga mat family and replaces my typical foam based ‘entry level’ yoga mat which has now been relegated to the back of the storage cupboard. The main claim to fame of this mat is portability, one of the main problems with Yoga mats is that they are fairly large and awkward to transport. This is especially relevant in large cities such as the UK where using public transport is the norm and trying to squeeze into an already over packed underground tube with a yoga mat hanging off your shoulder will get you plenty of dirty looks. Furthermore if you are going to be stopping by at yoga on the way home (or before work for the early birds), it’s far easier to maintain a somewhat professional image by being able to store your mat INSIDE your bag, rather than walking into a meeting with a yoga mat dangling off the side of your work bag.

The Yogo mat folds up to almost exactly half the size of a traditional mat (which is what you expect given that it is a mat that gets folded in half width ways). The folding process is incredibly simple and quick and doesn’t involve having to remember any complicated origami folding sequences so you won’t be left frantically trying to fold up your mat on the third attempt while the rest of the yoga class has already dissipated.

The folding procedure is shown clearly on the box and there is an instructional video here if you need more guidance.

The small size really does mean that it is easy to travel with, I have never even considered travelling overseas with a yoga mat because of its unwieldly size, but I have been able to easily fit this mat into my luggage, even when only taking a carry on bag. I probably wouldn’t take it on all of my trips simply because missing a week of yoga while on holiday would not bother me too much, but if you are strict about your practice and travel or practice outdoors a lot you will love the portability of this mat. Despite its small size, when fully unfolded it is almost exactly the same size as a conventional yoga mat, and just as grippy.

The increased portability does come at a cost though and for the Yogo Ultralight Travel mat it is padding. At only 1.5mm thick this mat is not going to be the most comfortable yoga mat you have used, that being said I found that it was perfectly adequate for everyday use and not simply as a travel mat. The increased resistance to compression of the rubber/cotton mixture when compared to a foam mat gives the feel that it is slightly thicker than it is. Those with sensitive knees or are on the tall side may want to check out the Yogo Ultra which has 2.5mm of padding and is slightly longer. I found that it was perfect for indoor use on a carpeted floor which provides additional padding and have used it in a few hotels.

The Yogo Ultralight Travel Mat is similar in thickness to other portable yoga mats such as the eKO Superlite Travel Mat by Manduka. The advantage over the Manduka is that this mat can be rolled up and secured, the straps also provide a handy way to carry or secure it and can also be used to hang up the mat after cleaning.

The Yogo Ultralight Travel Mat is made from a mixture of tree rubber and cotton canvas and, as you might expect, feels like a thin strip of rubber (gasps of amazement) rather than a traditional foam mat. The rubberized construction also means that it doesn’t compress as much as say a foam yoga mat and is extremely grippy. The feel of it immediately felt familiar to me but it wasn’t until later that I realized it reminded me of the textured rubber grip on a cricket bat, something I haven’t used since leaving school over a decade ago. Regardless, you are not going to be slipping at all on this mat, even if you are like me and prone to sweating.

The mat is actually two toned in colour, I own the grey colour which is a textured light grey on the outside and a plain but darker grey on the inside. Both sides are extremely grippy, personally I prefer to use the darker side facing upwards as when folded this is the side that will be kept clean. What this means however is that the buckle straps will be underneath the top corner of the mat when you practice. As someone who cares about aesthetics as well as function I was concerned that the creases on the mat from folding would irritate me, however I have found that they are not as visible as I initially thought, they also show less on the darker side of the mat, another reason that I keep this side facing upwards. Overall this mat has a clean and simple look with minimal branding.

At around $70 for the Ultralight mat  ($80 for the Ultra) this is definitely not the cheapest mat that you can find, but as far as portability goes it can’t be beat. The company is certainly not as well known as big names such as Manduka but the quality but it is quickly forging a reputation for itself as one of, if not the best, travel mat.