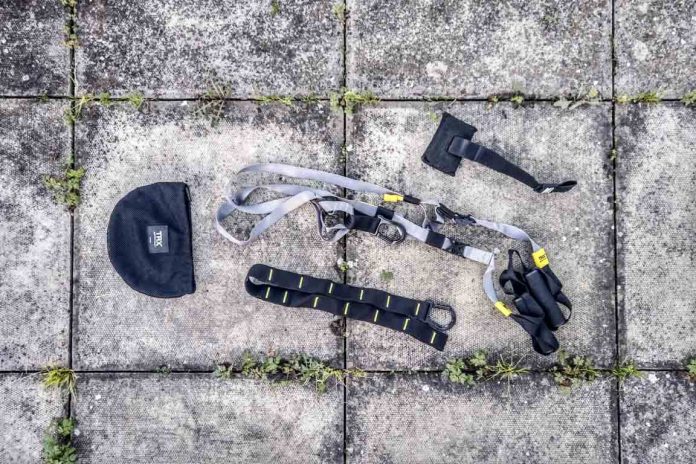 Talk about body weight training and a name that will undoubtedly come up is the TRX, and with good reason. Suspension trainers are a great way to supplement pure bodyweight exercises and allow for a greater variation of exercises and the resistance to be easily adjusted.

The TRX was created in 2005 by Nave SEAL Randy Hetrick who was looking for a way to keep fit while on the road and has grown in popularity ever since. One of their newer releases is the TRX GO Suspension Trainer. The TRX Go has been designed for portability and is their lightest suspension trainer to date, while still maintaining the bombproof design and quality that people have come to expect from the company. All the critical joints have reinforced stitching and it is clear that the company knows what it is doing.

Indeed I personally own (as in paid my hard earned cash for) the TRX Go, and have taken this trainer on almost all my trips that last longer than a few days. What I can tell you is that while it is a travel version and has foam covered grips instead of the rubberized ones or the proversions that are now in most gyms, it is robust and comfortable enough that I keep it set up at home and use it. I have been using it for close to two years now and it is still looking like new.

At first I was a little hesitant about the durability of the foam grips, especially when doing exercises where you put your shoes through the hand holds but they have held up remarkably well and still look brand new. In fact the only way that you can tell that it has been used is a bit of dust on the door anchor, evidence that I don’t dust as often as I should.

Weighing about as much as a water bottle at only 1 lb (or 454g for the rest of the world), and packing up smaller than a 6 pack of beer, the TRX Go can easily be taken on the road.

One of the best compliments that can be given to something created for travel is that I use it as an everyday piece of equipment at home as well. This thing is so solid and nice to use that I keep it attached to the door and throw it in its travel bag whenever I am getting ready to leave. Setup literally takes 30 seconds, and that’s if you are taking your time. Put the door anchor over the door, close it and make sure that it is secure and you’re done. When not in use I found that with the door anchor close to the hinges of the door, it stayed in place even with the door open, this means that it hangs out of the way.

One of my worries early on was not that the TRX could not hold my 85kg weight, but that the door would not be able to. TRX suggest that you put the anchor so that your weight is pulling the door closed, however the layout of the doors in my flat were not conducive to that and I was forced to pull with the hinge of the door. Most doors open inwards, this means that if you are exercising in the room, as most people will, all the force will be on the hinges and lock. However after dozens of sessions I have not yet had an issue with this and my door is fairly old. I did, however, put the anchor point as close to the hinges as possible which which places more on stress on the hinges rather than the latch.

Still, if you don’t live alone it is probably a good idea to lock the door or tell people that you are exercising to avoid any incidents from them opening it while you are using the TRX.

In addition to the door anchor it also comes with an extension strap that allows you to attach the suspension trainer to a branch or overhanging beam. I have not used this much, besides the occasional rooftop workout where I attach it to the railing. The railing is a little low to be able to get the full range of exercises however so I usually stick to indoors.

Unlike weight training at the gym, there is very little muscle isolation when it comes to bodyweight exercises. This can be both a pro and a con. On the positive side, engaging your core and supporting muscles allows for a more efficient workout if you are pressed for time or are on holiday and just looking to keep fit.

But isolated exercises are more effective for pure strength training and allow you to train a particular muscle group to failure whereas targeting multiple muscle groups can mean that the supporting muscles reach failure before the one that you are trying to target. If you are training for isolated strength gains then old fashioned weights may be a better way to go, this is not to say that you won’t gain strength using the TRX, in all likelihood you will, it is just not the optimum way to do so. However bodybuilding has never been the designed purpose of the TRX and for travelling it cannot be beaten.

One of the downsides of bodyweight exercises is the lack of easy resistance adjustment. The adjustment of the TRX allows you to train to a greater level of muscle failure than you would be able to achieve with bodyweight exercises alone. For example, if you were doing pushups and reach failure that is the end of that exercise, however with the TRX you are able to change the resistance by changing the angle of the straps and as such can continue to train those muscle groups. I am not saying that this is always the best way to train but it is nice to have the option. I found myself naturally moving to a slightly higher rep range when using it in place of free weights.

This ability to vary the resistance also means that it is perfect for beginners who may be intimidated by free weights or unable to do some bodyweight exercises such as pullups. It is also good for people who are recovering from an injury, at one stage I pulled my shoulder and used the TRX extensively doing my recovery. The TRX allows you to start with an easy level of resistance and build up your strength at your own pace.

The popularity of the TRX means that there are literally thousands of exercises that you can find to do with this simple piece of equipment. Think of a body part that you want to exercise and I guarantee that someone has posted a workout for it. In fact there are probably 3 or 4 workouts available. TRX has an official mobile app with a variety of exercises but there are also a bunch of 3rd party apps for bodyweight and suspension training.

Coming in at $99 for the cheapest TRX, which is essentially a few nylon straps and a couple of handles, you are definitely paying a premium for the brand name. The company has been around for 10 years however and while there are less expensive suspension trainers on the market I still feel that it is better to stick with a tried and tested manufacturer. The last thing you want is for your suspension trainer to break while you are hanging from it while on holiday.

Which TRX is best for me?

Since entering the market, TRX has expanded their lineup considerably and now offer a range of suspension trainers. However I believe that the TRX GO or TRX Home kits offer the best value. The PRO and Tactical versions are good, and the rubberized handles feel great, however I do not think that this justifies the increased cost and weight. Especially if you are going to be using this for travel. The number of included exercises and included exercise poster is also greater for these premium models, but the massive support base for the TRX means that you can find plenty of guides online that cover these exercises and more.

Overall the TRX is a great piece of gear to help you keep fit on the road and if you are looking to stay fit either at home or on the road it definitely deserves a spot in your luggage.

For those of you that are looking for an even lighter, more portable version. Check out the Pocket Monkii. This is a Kickstarter initiative started with Monkiibars, which was wildly successful and they diversified into a range of bodyweight products. While they are a new company, the product seems sound and it will definitely appeal to those that appreciate good design over cost.