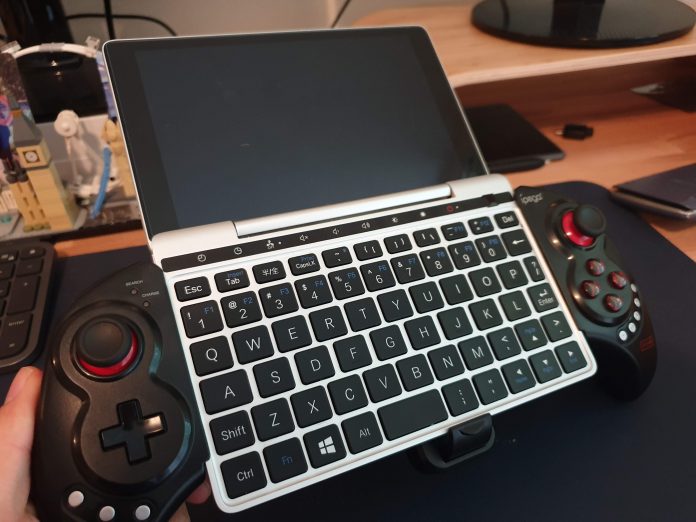 Handheld gaming is dominated by the Nintendo Switch which is a fantastic device in its own right. But when it comes to handheld Windows computers there are not that many choices. GPD has managed to carve out a niche with their GPD Pocket and GPD Win lines and if you are going to be spending most of your time gaming then certainly get the GPD Win (or check out the Win Max if size is not an issue.

But what do you do if you are like me and prefer the keyboard on the GPD Pocket 2 and spend most of your time typing on it but still want to play the occasional game?

That’s where the IPEGA 9023s comes in. The 9023 has been on the market for a while now and the fact that it has been refreshed with the 9023s should tell you that it was well received.

I opted for the 9023s as it appeared to have the best ergonomics. I had also seen a video with the GDP Pocket 1 managing to fit into it so thought that there was likely to be fewer issues with getting the GDP Pocket 2 to fit.

It feels as though this gamepad was made for the GPD Pocket 2. It fits like a glove.

As you can see the keyboard slides underneath the side holders of the controller meaning that there is absolutely no chance of it falling out by accident. In fact I jiggled it around upside down and there was no movement what so ever.

Another great thing about it is that it keeps the air vents free when clipped in which helps avoid thermal throttling.

The buttons all feel clicky and responsive, the only minor grip I have is that the L and R triggers are not really triggers but just buttons.

Its not all roses though, the biggest issue for me is that it only supports the older d-input rather than x-input. This means that Windows 10 will detect and connect the controller but the majority of games will not actually recognise it. To get around this you do need to install XBoxCE and configure the controller. This will convert the d-input into the x-input format. It is a little bit of a pain to set up and you do need to manually add each game to XBoxCE, however you only need to do that once (and if you are using it for emulators like me you only need to add it to the emulator and not each ROM). It is also rather bulky, even when it is collapsed it takes up more space than my XBox 360 controller which is a shame as the whole point of this is to be portable and play games on the go.

Like most clip on controllers it also covers all the ports so you have no access to the headphone jack or USB ports. You can access the USB C port if you are prepared to not have the GPD Pocket 2 sitting further back in the IPEGA 9023s but I found that this threw off the centre of gravity and made it more difficult to hold. Overall through I found that for games that are less demanding (and lets face it, you aren’t going to be running AAA rated games unless you are streaming from another machine) the battery life was more than sufficient to play for hours without worrying about it.

The IPEGA 9023s is not perfect and it is clearly designed for tablets and phones but it is still a superb gamepad for those of us wanting to game on the GDP Pocket 2. Even though you may need to jump through a few hoops to get it working in Windows 10 I absolutely recommend it.

If you want to find out more about the GPD Pocket 2 read the full indepth review here.